Mass-consumed and mass-produced data are treated as an asset; a commodity that has fallen into the hands of intelligent machines and processors. Control over personal data is lost in an arena, where there is no room for secrecy. Technology meets mythology and equality is threatened as robots monitor, predict, and score people’s behavior. While data’s value is unequally distributed, people, not being parties to any agreement, get affected and influenced by powerful algorithms. The lack of control, the absence of secrecy, the unequal distribution of data’s value, and the phenomenon of otherness, where non-parties may be affected, constitute four important aspects of the personal data protection problem. Some call for reconceptualization of privacy to end the game of poker, where individuals play with their hands open, whereas machines keep their cards close. Others demand fair compensation for personal data processing. In this study, a property rights-like approach is examined to determine whether and to what extent moral rights, sui generis rights, and trade secret rights could resolve the problem. As this approach would most probably fail to address all aspects of the problem, the introduction of trust via fiduciary laws is tested to overcome risks posed by Big Data and processing practices. Loyalty, trustworthiness, and care could be accompanied by duties of good faith and ethical conduct through a fair play-like approach that would bring fair information principles to the discussion table. Blockchains’ potential is also examined; while these disruptive technologies are said to be extremely promising, this study finds that they would most probably be a bad fit for privacy. This makes fiduciary laws and fair play the key to reach the optimal result and overcome the above aspects of the personal data protection problem. 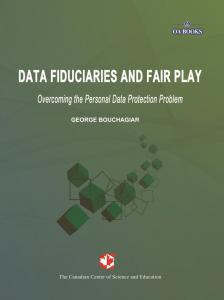 Details about this monograph

Copyright © The Canadian Center of Science and Education. All Rights Reserved.